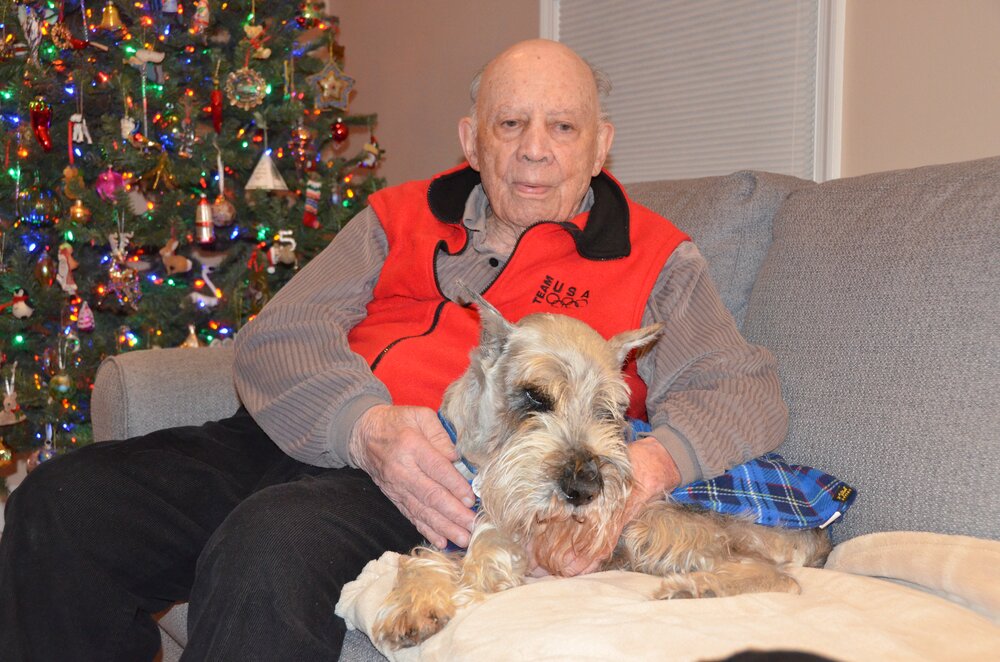 Please share a memory of Erich to include in a keepsake book for family and friends.
View Tribute Book

NOTICE   THE FUNERAL MASS AND BURIAL HAS BEEN POSTPONED UNTIL APRIL 25, 2022. WE Have updated the service schedule. Please see the schedule below the obituary.

In lieu of flowers, memorial contributions may be made to https://www.guidedogs.com/

Dr. Erich Henry Rutscheidt, 95, of Great Falls, VA., died Wednesday, December 29th, at Arleigh Burke Pavilion Rehabilitation, in McLean VA. Born in Troisdorf, Germany, on March 7, 1926 he came to the US as a child with his parents and older brother and was raised in Brooklyn, NY. Erich lived in Great Falls, VA, for over fifty years. He served our country honorably in the army during World War ll, receiving a bronze star for actions during the Battle of the Bulge. Erich graduated from the University of Vermont and received his PhD in Astronomy from Georgetown University. He worked for the U.S. Army Topographic Command in Washington, DC. and retired from the Defense Mapping Agency in the 1980’s. Erich was predeceased by his wife Maria Perri, his parents Jake and Gertrude Rutscheidt, and his brother Henry. Erich leaves behind his brother-in-laws Joseph Perri and his wife Annette, Ben Perri, and Vincent Perri and his wife Rosemarie, as well as many loving nieces, nephews, great-nieces, great-nephews as well as many caring friends. Visitation is April 25th, 8:45am to 10:15am, at Adams-Green Funeral Home, 721 Elden Street, Herndon, VA. Mass is 11 am, April 25th at St. Catherine of Siena Catholic Church, 1020 Springvale Road, Great Falls, VA, followed by interment, 2 pm, at Quantico National Cemetery, 18424 Joplin Road, Triangle, VA. In lieu of flowers, if you wish, you may make a memorial contribution to https.//www.guidedogs.com/

Interesting life facts about Erich:
When Erich was only 18 he was drafted into the US Army during WWII. He served from 1944 until 1946 as an enlisted soldier fighting for America. When he arrived in the European theater, he was immediately involved in the Battle of the Bulge. The Battle of the Bulge, also known as the Ardennes Offensive, was a major German offensive campaign on the Western Front during World War II which took place from 16 December 1944 to 25 January 1945. It was launched through the densely forested Ardennes region between Belgium and Luxembourg towards the end of the war in Europe. Erich received the Bronze Star for his actions during that battle.

Erich often said that his fluent knowledge of the German language saved his life. Erich was put on the line in early 1945. Combat was brutal at that point. He recalled that most of his unit was more or less wiped out. As the upper command was trying to figure out how to integrate the few remaining members of Erich’s unit, his very valuable native German language skills became known to upper command, which needed battlefield interrogators. Erich spoke German with his parents while he was growing up in Brooklyn. He spent the remainder of his tour of duty as an interrogator, away from the front lines. He believed that reassignment saved his life.

If you use GPS, then you and the rest of the navigating world have Erich and countless others to thank for their groundbreaking work in measuring the exact size of the earth during the 1950's and 60's. Erich spent many months in Africa, Central and South America, and Greenland using special instrumentation to exactly measure longitudinal (vertical) distances on the earth. His instrument of choice was the Geodimeter (acronym of geodetic distance meter). The Geodimeter was the first optical electronic distance meter surveying instrument. It was originally developed for measuring the speed of light. It was invented in 1947 by Erik Osten Bergstrand and commercialized in 1953 by the AGA company of Sweden. Using the known speed of light,

Erich used the Geodimeter to bounce light back and forth between two points to accurately measure distances.

Erich loved dogs. Throughout his life he had many beloved canine companions. He was the Training Director for the Dulles Gateway Dog training club and very involved for years. Members said he was an excellent and patient instructor. He was also very active in the Potomac Valley Standard Schnauzer club, being a member dating back to the 1970’s, serving as President in the 80’s. Erich once had a female Schnauzer named Karina that had a litter of puppies. Once the puppies were born, Erich couldn't bear to part with any of them. He kept all four, the two males Thor and Viking he showed to their championship. Erich trained and showed many, many dogs in both conformation and obedience. One of his pride and joys was taking his beloved Schnauzer, Ch Katahdin Prince of Tides all the way to Utility Dog Excellent (UDX) in Obedience.

Erich was quietly proud to have served the United States Army. He loved wearing his WWII Veteran ball cap wherever he went. He loved this country and was grateful that it welcomed his family in the 1930's when they immigrated to America from Germany.

The following was an interview with Erich from 2015:

Holy Water and the Vet

An Interview with a World War II Veteran
Erich Henry Rutscheidt
"In a bad situation, do the best you can."

Share Your Memory of
Erich
Upload Your Memory View All Memories
Be the first to upload a memory!
Share A Memory
Send Flowers
Plant a Tree