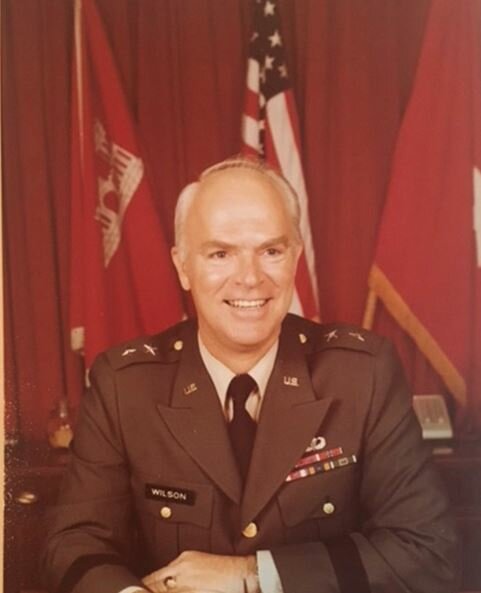 MG Wilson graduated from the United States Military Academy at West Point in 1952, and was commissioned in the US Army Corps of Engineers.  He received a master’s degree in Civil Engineering from Princeton University in 1957.

MG Wilson served one tour in Korea, two tours in Vietnam and three tours in Germany.  During his thirty-year military career, MG Wilson had multiple assignments, including at West Point as an instructor, in Vietnam as a Combat Engineer Battalion Commander, in Stuttgart, Germany as the Staff Engineer for the VII Corps, and in Mobile, Alabama, as the US Army Corps of Engineers District Engineer.  While he was the District Engineer, a storm barrier island, created by the Corps’ dredging activity, was named “Drake Wilson Island.”  As a general officer, MG Wilson was the Division Engineer Europe in Frankfurt, Germany, the Deputy Director of Civil Works for the Corps of Engineers, in Washington, DC, and the Director of Military Programs for the Corps of Engineers, also in Washington.  Among his decorations are the Distinguished Service Medal, the Legion of Merit and the Bronze Star.

After his retirement in 1982, MG Wilson held civilian positions in Boston, Massachusetts, and in Riyadh, Saudi Arabia.  After leaving Saudi Arabia, MG Wilson and his wife Ann retired at The Landings in Savannah, Georgia, where they pursued boating adventures, traveled around the world and golfed.  After twenty years in Savannah, MG Wilson and Ann relocated to Lorton, Virginia, to be closer to family, and ultimately to the Falcon’s Landing Military Retirement Community in Potomac Falls.

MG Wilson and Ann enjoyed sailing Boundless I, a 41-foot sailing vessel kept in the Virgin Islands, and then cruising the Intracoastal Waterway on Boundless II, a 36-foot Grand Banks trawler.  They also loved skiing with family and friends.  His ready wit, his great thinking about how to have wholesome fun and his genuine concern for others will be sorely missed.

MG Wilson is survived by Ann Hofford Wilson, his wife of sixty-nine years, his sons Mark and Chris Wilson, and his daughters Betsy McBride and Jean Sexton.  He is also survived by his three grandsons, Scott Wilson and Kevin and Michael McBride, his granddaughters Kristina Wilson, Nicole Hemby, and Katie Hearns, and his two great-granddaughters, Maeve McBride and Paige Hemby.

A funeral with military honors will be held at Arlington National Cemetery at a later date.

Share Your Memory of
Drake
Upload Your Memory View All Memories
Be the first to upload a memory!
Share A Memory
Send Flowers
Plant a Tree