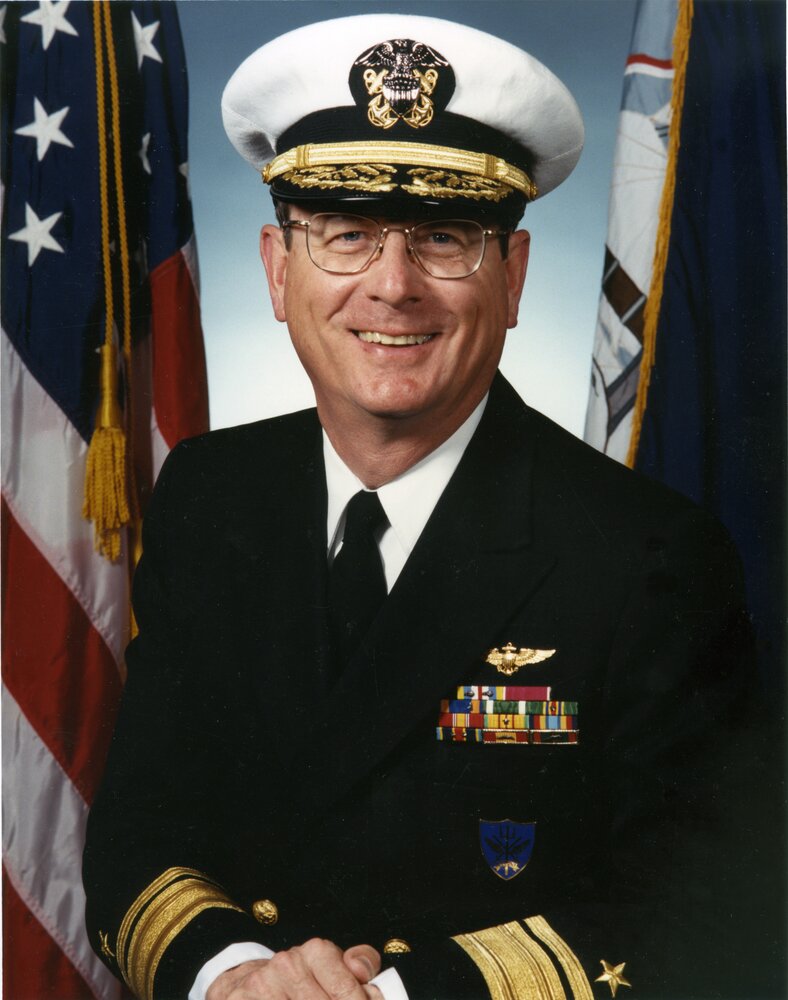 Eric, called Alton by his family, had an illustrious 35-year Naval career, followed by a 25-year consulting career, and in his final years was surrounded by his extended family. From humble roots in Baton Rouge, Louisiana, he exceeded all expectations, by becoming a Naval Aviator and earning two stars as a Rear Admiral.

Despite his stellar career achievements, he always considered his 64-year marriage and the family he built with his high school sweetheart, Marshall Marie Phillips, to be his greatest accomplishment. He lost his beloved wife in January 2021, but Eric is survived by his five children: Douglas (Melinda), Michelle, Erin (Jim), Scott, and Kevin (Yvette); seven grandchildren, four great-grandchildren and one great-great-grandchild; his brother Wayne (Claire) and numerous cousins and nieces and nephews. Eric and Marshall created a home designed to attract family that became a gathering place and was always the annual holiday destination.

Eric graduated from Tulane University in 1958, became a Navy pilot in 1960, and was sent to Hawaii, Japan, and California in quick succession. All the while he and Marshall grew their family. Their children were born in New Orleans, Pensacola, San Diego, Honolulu, and Key West.

He spent almost two years at sea aboard the attack carrier USS Shangri-La (CVA-38) in the Mediterranean Sea in 1967-68, and Marshall travelled to Europe twice for extended visits to meet him when the ship was in port. In 1969, while at the Naval War College in Newport, Rhode Island, Eric completed his master’s degree in International Affairs from George Washington University.

He served with three Patrol Squadrons flying anti-submarine aircraft, completing six deployments with the Pacific Fleet, including operations from Cam Ranh Bay during the Vietnam War. He commanded Patrol Squadron 40, “The Fighting Marlins”, in 1975-76.

In mid-career he was called to Washington to serve on the Navy Staff, where he held several policy and planning positions at the Pentagon. He was the Navy member of the Staff Group of the Chairman of the Joint Chiefs of Staff (1980-82) and later Deputy Director of the Defense Mapping Agency (1985-86).

Overseas, Eric commanded Naval Station Keflavik, Iceland from 1982 to 1984, and returned for an unprecedented encore as Commander Iceland Defense Force, the US and NATO flag officer in Iceland, from 1986 to 1989. He hosted Reagan and Gorbachev at the 1986 Reykjavik Summit and made a speech introducing President Reagan that was broadcast worldwide. Eric charmed the Icelandic people by speaking their tongue, enabling new levels of cooperation and achievement. He was featured regularly on local television. In 1989, the President of Iceland conferred on him the Order of the Falcon, their highest honor.

His final Navy assignment was at the US Embassy in Beijing, where he was the Defense and Naval Attaché from 1990-92. He was influential in thawing post-Tiananmen tensions and was the first to inform the State Department that the war between China and Vietnam had ended. He was awarded his second Distinguished Service Medal for his service in China.

Through all his successes, Eric acknowledged the essential contributions of his unfailingly devoted wife. They were partners in every sense, working through every problem together, standing by each other through thick and thin.

After retirement from the Navy in 1992, Eric became a sought-after consultant on the Far East and Asia-Pacific security matters. He brought his expertise about the Chinese military to his extensive work with the US intelligence community and was a consultant for the Center for Naval Analyses. He was Director of Asia-Pacific Studies for the Institute for Foreign Policy Analysis. His writings were published in professional books, periodicals, and academic journals.

What distinguished Eric McVadon was his incredible drive to succeed and ambition to make a lasting difference. He was interested in everything from growing artichokes to astrophysics. He traveled extensively, visiting 50 countries, from Greenland to Mongolia, and Yugoslavia to Zimbabwe. He was a beacon of integrity and a loyal friend who stayed in touch for decades through a famous Christmas card list. He had a way of connecting with people so deeply that they remark on his impact even years later.  He will be memorialized as an American Hero and remembered as a man who loved his wife, his children, his family, and the whole world with all its problems, because most of all HE LOVED LIFE!

A combined funeral service with full military honors will be held for Admiral McVadon and his wife Marshall at Arlington National Cemetery on a date to be scheduled.

Military funeral services will take place at Old Post Chapel, Ft. Myer Base followed by US Naval Honors at Arlington National Cemetery at a date yet to be determined.

Share Your Memory of
Eric
Upload Your Memory View All Memories
Be the first to upload a memory!
Share A Memory
Send Flowers
Plant a Tree