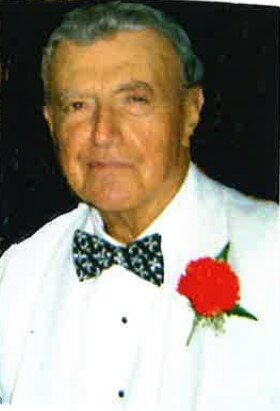 Thomas "Tom" Lisa passed away on March I9th, 2022 at the age of 94 in Sterling, VA. His short illness, like his long life, was peaceful and filled with the love of family and friends.

Tom was born in Yonkers, NY on September 2, 1927 and was greatly loved.  He will be missed by his wife of 33 years, Joan V. Lisa, children Thomas (Susan), Donna Mazzola, Anthony (Kevin Kearins), stepchildren Judy McCoy (Tidal), John Jaicks (Lidiane), Dr. Jeffrey Jaicks, James Jaicks (A-Lyn) and Jennifer Ciardullo (Alfonso). He was blessed with 16 grandchildren and three great grandchildren. He was beloved by all of them.

While living in Yorktown Heights, NY, he began his career as an art director and later became the owner of The English Company.  While living there, he served as president of The Rotary Club and became a member of The Knights of Columbus (KoC), a Catholic charitable organization.  Tom later moved to Naples, FL, where he became an active member of St. William Catholic Church. Once again, he generously gave of his time and continued his service in the Knights of Columbus, a tenure that spanned over 60 years.  He became the KoC's Grand Knight at St. William Council, past Faithful Navigator of Everglades Assembly, Member 4th Degree Color Corps, and former Florida State Chairman of the Diocese of Venice for KoC Charities.

Tom was preceded in death by his parents, Thomas and Margaret Lisa, his wife and mother of his children, Corinne Lisa, and his sister, Mona Mercurio.

Contributions in Tom's name can be made to Knights of Columbus Charities or Avow Hospice in Naples, FL.