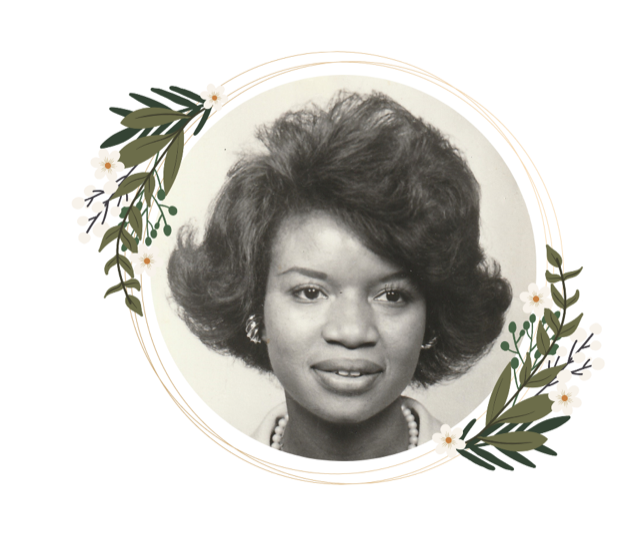 Please share a memory of Delores to include in a keepsake book for family and friends.
View Tribute Book

wife and homemaker, mother and grandmother

From Columbia, South Carolina to Washington, D.C. to Reston, Virginia...

At an early age, Delores moved with family from , to where she spent her childhood years in a lively household full of memorable experiences. The oldest daughter of eleven children born to Mr. and Mrs. Smith, Delores helped care for her younger siblings. She was baptized at a young age and fondly remembered growing up under the leadership of the Reverend Shellie Lee Gardner, pastor, first of the and then of the , both located in A very active member, she sang in the choir, served on the usher board, and was assistant church clerk. After services, she enjoyed the times she and her siblings had Sunday dinner at the home of their pastor.

After high school, Delores excelled as a clerk-stenographer with the Agency for International Development and as a U.S. Peace Corps administrative assistant.

In 1963, Delores married and joined the in northwest D.C. She joyfully embraced motherhood in 1964 with the birth of her son, Robert "Bobby" Edward Frye Jr. Completely devoted to her expanded family, Delores still found time to complete a course at George Washington University in the Fall of 1965.

Delores also became a community activist. She was a member of the Metropolitan Washington Planning and Housing Association, , and was featured on a D.C. Metro Bus desegregation poster displayed on hundreds of buses throughout the city. The advertisement showed the Frye family and a white family of four with Delores kneeling and embracing two toddlers: her son, Bobby, and the other family’s little boy.

Delores and her husband purchased their first home, in northwest D.C. in a majority-white neighborhood. Since many areas were still segregated, the President of their community's homeowners association arranged a police escort on moving day to ensure their safety- due to bomb threats. In 1966, Delores and her family moved from , to , where she immediately became active in the community. From 1968-70, she worked as a secretary for Reston, VA Inc., where she met Robert E. Simon, the founder of the nation’s first planned community. Delores and Bob also welcomed the birth of their daughter, Amanda Irene Frye, in 1970.

Delores took great pride in caring for her family as well as finding a way to manage her many activities outside the home, whether in her professional or community life. She was also an avid gardener and horticulturist. She took great pride in maintaining her lawn and looked forward to the onset of Spring and her blooming azaleas, of which she was always so proud.

Delores served as the initial church secretary at the , She was the secretary for the Planning and Zoning Committee for the Reston Homeowners Association. She was also a member of the Fairfax County Democratic Committee, where she worked tirelessly to register voters. Additionally, she was a precinct poll watcher for federal and state voting.

Delores enjoyed supporting , state, and national political campaigns. In 1972, she served as an alternate delegate for New York Representative Shirley Chilsolm for president and participated in the Democratic National Convention in . She delivered a speech from the podium during the convention that was captured on primetime television. Delores also served as an escort for the 1977 Inaugural Committee for President Jimmy Carter and attended the inaugural ball. She also volunteered as the Centreville Coordinator for Doug Wilder’s campaign for Lieutenant Governor.

Delores received three state appointments. In 1985, Governor Charles S. Robb appointed her to the Education Block Grants Advisory Committee, a three-year term. In 1986, Attorney General Mary Sue Terry appointed her to the Advisory Committee on Drug Initiatives, and in 1987, Governor Gerald L. Baliles appointed her to the Commission to Study Historic Preservation. Delores also served as a volunteer for the President Clinton-Gore Transition Team, worked in the White House Complex beginning in January 1993, and received a Certificate of Appreciation for outstanding service and hard work in the correspondence department.

While Delores contributed a great deal to her community and political work, she was a mother first. She volunteered in her children’s schools and ensured they grew up with a sense of their African American culture and heritage. She participated in volunteer aide programs at Lake Anne Elementary and Haycock Elementary Schools, helped with homework, attended teacher conferences, and made sure her son and daughter arrived to trumpet and violin lessons, and band and orchestra practices on time. As a charter member of the Reston, VA Chapter of Jack and Jill of America, Inc., she encouraged her children to participate in the organization’s activities such as children-led business meetings, Black History Month activities, community service projects, overnight teen conventions and ski trips with other Mid-Atlantic Jack and Jill chapters, Reston Chapter youth parties, and the annual cotillion.

Delores enjoyed welcoming new families into the community and found her niche selling homes. After preparing for and passing her real estate salesperson exam, she worked for several real estate companies as a sales agent and manager. Real estate became her passion and she was recognized by the Northern Virginia Association of Realtors as a top performer, qualifying annually for five consecutive years (1973-77) for membership in the Million Dollar Sales Club, having sold a minimum of a million dollars worth of real estate each year.

Delores had been an early fighter for housing justice while living in the and brought that experience with her as a realtor in . Featured in a Washington Post article on September 5, 1974, for her achievements while working at Wellborn Properties, Delores recalled a phone call during which an agent from another real estate company had asked her if a particular area they were showing was a colored area. She asked, “What color did you mean?” Her interlocutor replied, “You know.” Delores said to the man, “Oh, you mean Black – like me?” She told the reporter, “The man nearly croaked on the phone.”

After obtaining her broker’s license, in 1975, Delores became the first Black woman in Northern Virginia to establish her own real estate company, Delores A. Frye Real Estate Inc, located on Lake Anne Plaza in Reston, VA. Lieutenant Governor Chuck Robb, Chairperson Martha Pennino of the Fairfax County Board of Supervisors, and Delegate Raymond Vickery of the Virginia House of Delegates attended her grand opening ceremony in March 1979. In 1987, the Martin Luther King Jr Christian Church, , presented Delores with a special “Black Female Entrepreneur” award in recognition of her career as a realtor. Her office was in the perfect location for her, and she truly loved meeting and greeting people on the Plaza. Decades later, after her retirement in 1993, Delores continued to socialize with fellow Restonians and visitors at and at the .

Delores lived and owned property in for 56 years. She initially resided in Hickory Cluster, bought investment properties, maintained her office on the plaza, and lived in her home for 47 years. She was a resident at Great Falls Assisted Living on for the last two years of her life. She was loved by staff who provided great care and engaging activities she cherished.

The family asks that donations be made to the Team page of Great Falls Assisted Living: Memory Care Community for the Alzheimer's Association Walk to End Alzheimer's

Share Your Memory of
Delores
Upload Your Memory View All Memories
Be the first to upload a memory!
Share A Memory
Send Flowers
Plant a Tree