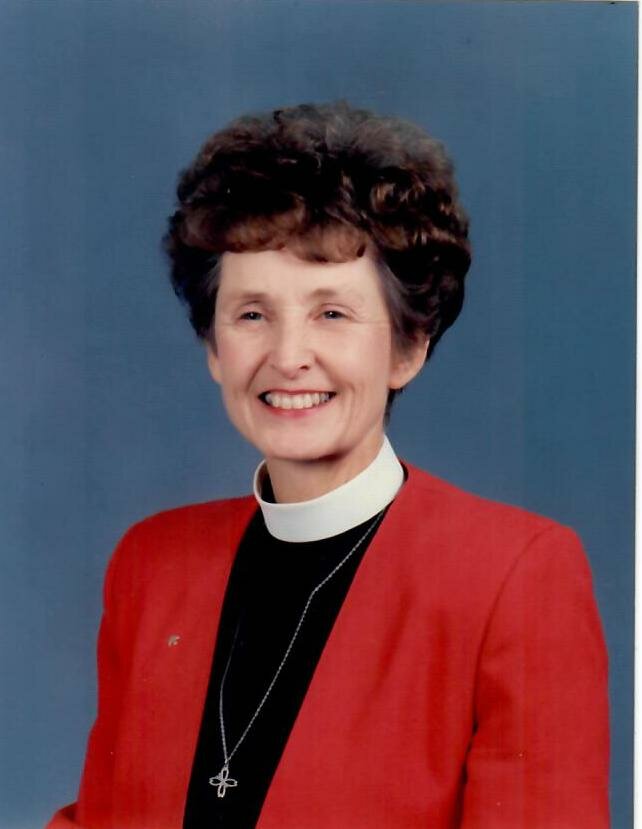 Geri’s early life was centered in the upper Midwest. Born March 14th, 1934 in Ada, Minnesota to Neva and Lloyd Ness, she was the fifth of six children that included Donald, Lucille, Leslie, Dwain, and Marlin.  Majoring in music and English, she received her Bachelor of Arts degree from Concordia College, Moorhead, Minnesota, where her musical talent found expression as a member of the famed Concordia Choir. Early professions included teaching elementary music in Minneapolis and middle school music at Alice Deal Junior High, Washington, DC., and a successful career in real estate sales in the northern New Jersey suburbs of New York City.  She received a Master’s degree in Clinical Psychology from the University of Houston, opened her own counseling practice and for five years served as Chaplain at the M.D. Anderson Cancer Hospital in the Houston Medical Center.  A Master of Divinity degree was earned at Lutheran Theological Seminary, Gettysburg, which led to her ordination into the ministry of the Evangelical Lutheran Church in America. Geri served as Pastor at King of Kings Lutheran Church, Fairfax, Virginia, until her retirement in 2001. The congregation honored her with the title Pastor Emeritus.  Her active life in retirement was interrupted by the onset of Parkinson’s disease, and she died from its effects on April 26, 2022.

Geri’s creative side resulted in stellar school musical productions during her teaching years. Her years as counselor and chaplain in a cancer hospital sharpened her ability to identify the needs of people going through the most critical times of their lives. As a Pastor, her widely different life experiences enabled her to focus in unique ways on the lives of her parishioners. She was an extraordinarily gifted preacher and an insightful counselor, with a singular ability to connect with a person’s heart, mind, and soul.

Geri followed six different career paths, all successfully. None was more important to her than family and motherhood.  Family members have found guidance from the axioms “nothing is by accident” and “everything happens for a purpose.”  She loved to plan vacations that would create lasting memories for the children and bonds within the family. Her protective instincts found her keeping close track of weather reports, especially predictions of tornados and hurricanes that might affect the homes or travel of loved ones.  She became lovingly known to family as the Harbinger of Doom.”

Growing up close to the soil on her family farm, she developed early on an inner love of nature, of gardens, plants, flowers, birds, animals, pets, and more.  Well before the word “ecology” came into common usage, she became an activist for environmental causes.  She sponsored backyard fairs that raised awareness of emerging problems.  She wrote a study booklet for the Lutheran Church in America titled: “World Without End: Are You Sure?” She worked her way into a US Department of Agriculture meeting with CEOs of pesticide manufacturers, challenging Dow and others with knowledgeable, probing questions.  Geri was intensely interested in world developments and in humanitarian causes.  Taking her cues from Scripture, she found ways to support immigration and refugee work, world hunger programs, and dozens of organizations that combat suffering in the world. Appreciation of nature and interest in American history meant visiting a great number of national parks and all Presidential Libraries.  Geri possessed a carefree, funny, engaging side.  King of Kings members will recall her performance as a Blues Brother, complete with dark glasses and cartwheels down the aisles at over 60 years of age.

May you rest in peace and dwell forever in the paradise of God.

Share Your Memory of
Geraldine
Upload Your Memory View All Memories
Be the first to upload a memory!
Share A Memory
Send Flowers
Plant a Tree