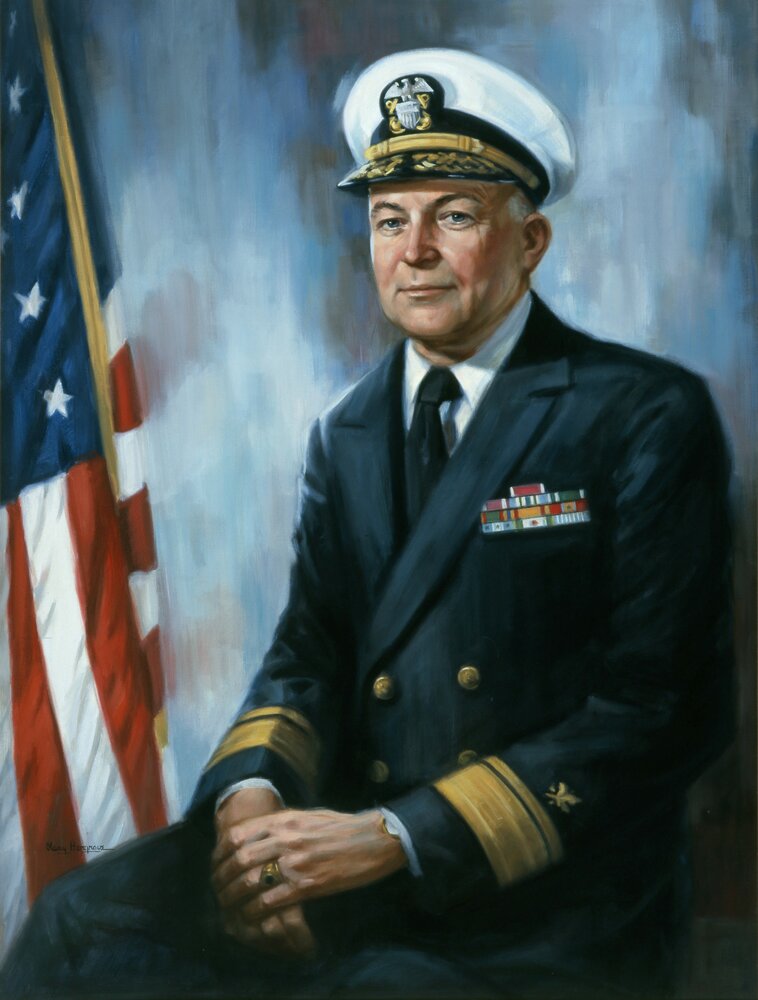 Bill was born in San Diego on July 5, 1930, to William J. J. Ryan, MD, and Elizabeth Bell Ryan.  He had three siblings, Patricia, Maureen, and Barry.  They grew up in San Diego and Muskegon, MI.

Bill graduated from the United States Naval Academy (USNA) with the Class of 1952 as a member of 17th Company.  Upon graduation from the USNA, he served aboard the USS BON HOMME RICHARD (CV 31) and USS Halsey Powell (DD 686) in the Pacific.  He then transferred to the Supply Corps and served in various billets including USS Morton (DD 948) and the Naval Material command.  He was attached to the Naval Reactors Program of the Atomic Energy Commission and served in Admiral Rickover’s command for five long years.

After acquiring an MB from the George Washington University, he served in USS Simon Lake (AS 31) in Scotland.  He subsequently attended the Industrial College of the Armed Forces (ICAF).  He was next assigned to the Navy Secretariat as its Director of Procurement.

Promoted to flag rank in 1978, he was fortunate to receive continuous command assignments throughout the remainder of his career.  His last command was the Defense Fuel Supply Center which procured and managed the Department of Defense’s world-wide petroleum requirements.  His rewards include the Defense Meritorious Service Medal and three Legions of Merit.  He retired from the Navy in 1985.  Bill and his wife Julia moved to Annapolis after retirement.

Bill began his teaching career at the George Washington University and the University of the District of Columbia.  He was also the founder and principal of PR Associates which designed and taught instructional courses for the Government and commercial firms. After retiring again in 1995, he enjoyed a pleasant Annapolitan life, with boating, volunteering with the USO, and involvement with the Naval academy and class affairs. He was a member of the Epiphany Community of Annapolis, the New Providence Club, the New York Yacht Club, a Trustee of the Naval Academy Foundation, and a prior President of the USNA class of 1952.

Julia Catherine Meehan, his beloved wife of 49 years, predeceased him in 2002.  He was blessed to meet and marry another wonderful woman, the former Mary-lin Jackson, widow of 1952 classmate, Rear Admiral Demptser Jackson.  They lived bi-coastally together in Annapolis and San Diego until 2007 when they moved to Falcons Landing in Potomac Falls, VA.

Bill is survived by his sister Maureen, wife, Mary-lin Ryan, sons Peter, Jerry and John, daughter Sara Malanka and the three sons and daughter of Mary-lin and Dempster, David, Dennis, Reilly and Demarie, who he thought of as his own.  From those eight came 12 grandchildren; Colin, Joslin, Shae, Julia, Danny, Joe, Celia, Michael, Kendall, Cole, Dylan, and Devin, and five great grandchildren; Jacob, Calvin, Bradley, Madeline and Mia.