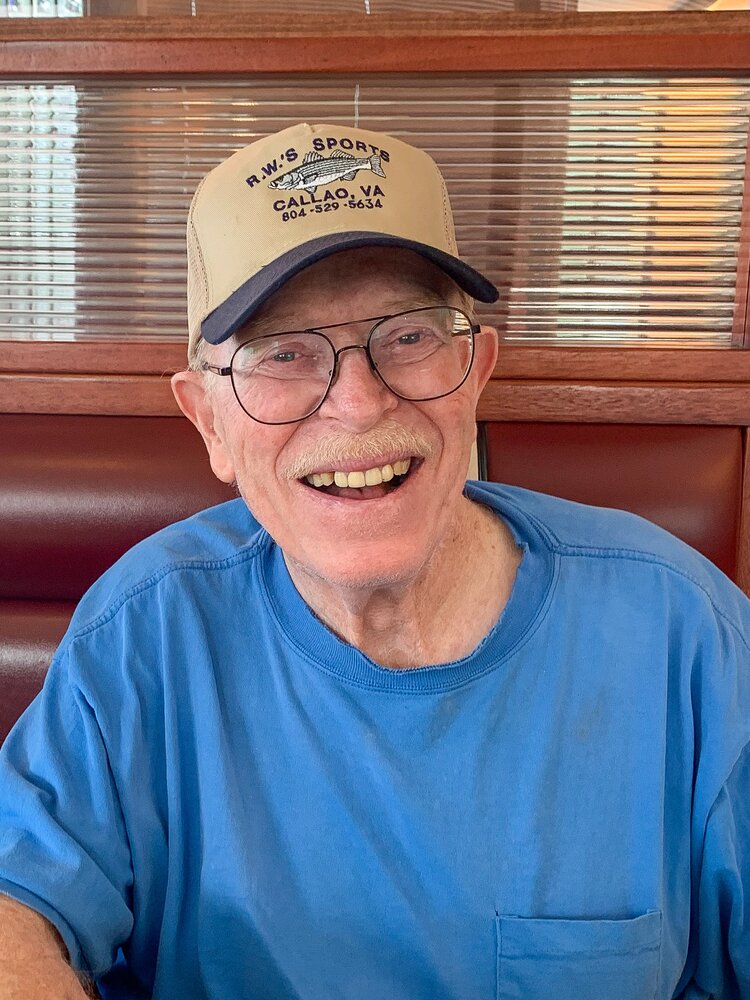 Randy lived an honorable, humble, joy-filled, music-filled, laughter-filled, hard working life, and was a beloved son, husband, father, grandfather, brother, uncle, and friend. He was born on January 28, 1949 in Asheville, NC to Vinita Greer (d. 2015) and Charles Robinson (d. 2007). His family lived in Asheville and Inca, NC before moving to Northern Virginia in 1954.

Randy was the second of four children (Danny, b. 1943, Randy, Greer b. 1950, and Patricia b. 1957). As a boy, Randy was a cub scout, on a swim team, and loved to fish and hunt. He once asked Santa if he could “possibly bring an Army outfit with patches and combat boots and hat and belt and real good leather shoestrings”, and he used those presents to hunt in the woods behind his house. He continued hunting throughout his life and spent many early morning weekend hours perched in tree stands around Northern Virginia.

He was mischievous, tough, and funny from a young age. One Sunday morning as a three year old, he saw his neighbors walking to church, and without a care in the world he headed out of his house and showed up for church service all by himself in just his underpants! When he was four, he was hit by a car when he got out of his own parked car because he “got tired of sitting.” His leg, neck, and both collar bones were broken, and he spent six weeks in the hospital and another month at home in traction. In elementary school he wrote the following poem:

To good girls and boys

And far too much candy

He was playful, he loved telling jokes, and both his laugh and his smile were priceless. As an adult, his wife and kids found him so hilarious that they even kept a running written list of ‘Big Kat Funnies’.

As he grew up, Randy developed a love for racing go-karts. Later, when his family’s company sponsored a NASCAR team, he traveled with his dad all over the East Coast to stand in the pits of all of the tracks. He would carry his interest and passion for fast cars, powerful engines, and the sport of racing for the rest of his life.

After graduating from Woodson High School in 1967, he fell in love with the ‘teacher’s pet’ from his sophomore Spanish class, Peggi Bennett. They were married at Walter Reed Army Medical Center on May 20, 1972, and were two days shy of their fiftieth wedding anniversary upon his death. Randy attended Bridgewater College, where he received a B.S. in Economics. While he was determined to get his college degree, he always knew that after college he would work for his family’s concrete construction company, Burton and Robinson, Inc. He rejoined the company full time after college, while simultaneously serving his country on weekends for six years in the Army National Guard.

Randy joined Burton and Robinson first in1961, spending summers as a teenager sweeping the floors, and later, working with his brother and others, devoting his blood, sweat, and tears (hands, feet, knees, and back) to building the company over the next 50-plus years. His work ethic was second to none. He often left home in the wee hours of the morning to get to job sites and returned home long after dark. He had such pride in his work, even late in his life, that he continued working full time and remained as hands on as ever until he finally retired at almost 71 years old. He literally ‘poured’ his heart and soul into concrete that can be found all across the region, and his life’s physical work will be the foundation of many communities for years to come.

Randy was, without question, the hardest working man on Earth, and all of his efforts helped build a wonderful life for his wife and family. Together, Randy and Peggi raised three children, Jason, Jeff (Nehal Emera), and Jessica (Christopher Hixon). Randy was immensely proud of all of them. He provided every opportunity for them to grow and experience all the good things in life. He loved spending time with them — from weekend breakfasts and local events to nights out to the occasional overnight trip. While he generally preferred to stay close to home, he loved hearing all about his children’s far off travels and adventures.

Randy was also a doting ‘Guppy’ to his three grandchildren: Hazel Marie, Rose Randall, and Hartley Grier Hixon. He was amazed by their ideas, in awe of their creativity, and astonished by their energy! He played hide and seek and dragged them around the house in laundry baskets. They loved sharing things with him, helping him, and giving him hugs, fist bumps, elbow bumps, and kisses. He always had a smile on his face in their presence, and they will forever love their Guppy with all their hearts.

Randy loved music, enthusiastically rocking out and playing the air guitar. He let music move him, which was evident in his energetic dance moves. He was well known for having a few “cold ones” and performing “The Gator” (a dance move in which he slid onto a dance floor on his back and belly and wriggled around like an alligator) to the song ‘Shout’. He believed that “you gotta fight…for your right…to partayyyyyyy.”

Randy was curious — always learning new things, inventing things, interested in knowing more, and learning more. He asked Siri to look up numerous topics every day, ranging from ‘Old Dominion Speedway in 1963’ to ‘Is spirulina a health food?’ While he didn’t get a smartphone until 2019 and never sent a single text message, his family taught him to ‘press the heart button’ on the daily pictures they sent him, and he made sure to ‘heart’ every single picture he was ever sent.

He was one of a kind. He spread half a stick of butter on a single slice of bread and ate sardines straight from the can. He only ate the yellow part of eggs for years because he swore the white part was full of cholesterol. He famously scratched all the letters off of his Toyota truck so it just read ‘YO’. He reminded his children when they were small that “counters are for glasses, not for a**es” and told people to “go on with your bad self!” He loved old westerns and Lonesome Dove, and he watched both repeatedly. He spoke in a bad Irish accent every time someone mentioned Ireland, and he loved mixed nuts but picked out all of the cashews. When he walked somewhere with his family, he loved singing “OLeft, OLeft, OLeft, Right, Left!” He offered family members bottles of Ensure and protein bars every single day, despite no one ever wanting either. He chose one type of beer and drank only that for years at a time: Coors Light, then Yuengling, then IPAs, then back to Coors Light. He liked to grab Peggi’s shoulder and shake it when he made a joke while sitting next to her, and he decided that one week before his daughter’s wedding was the perfect time to shave his head.

Randy was happiest in the presence of his family, and he showed them he loved them in the most precious ways. He always stirred “Peg’s” oatmeal and unwrapped Hershey kisses for her when she baked. He left her and his children regular post-it notes on the counter, many of which they’ve saved over the years. He brought in the groceries, took out the trash, and refilled their coffees. He always greeted them at the door, even when his back was killing him. He thought his wife, children, and grandchildren were smart, hilarious, loving, and kind, and he enjoyed nothing more than being with them. The thousands of hours spent together over the years in their kitchen, talking, telling stories, and hysterically laughing brought him so much joy.

Randy was a country boy at heart, and treated everyone he met with respect and a generosity of spirit. His loyalty to his family, pride in his work, desire to help where he could, passion for music, humble disposition, appetite for learning, and wonderful sense of humor are all traits his family will honor, cherish, and do their best to carry on in his memory.

H.A.G.O. Big Kat, and thank you for everything. You are loved beyond measure and will be missed every second of every day in the years to come. “Ugga Mugga Meatball.”

Randy’s family will be hosting a celebration of his life on Sunday, June 26th from 5:00-8:00 pm at the Washington Dulles Marriott. All who knew Randy directly or indirectly are invited and welcome to come celebrate.

Share Your Memory of
Randall
Upload Your Memory View All Memories
Be the first to upload a memory!
Share A Memory
Send Flowers
Plant a Tree