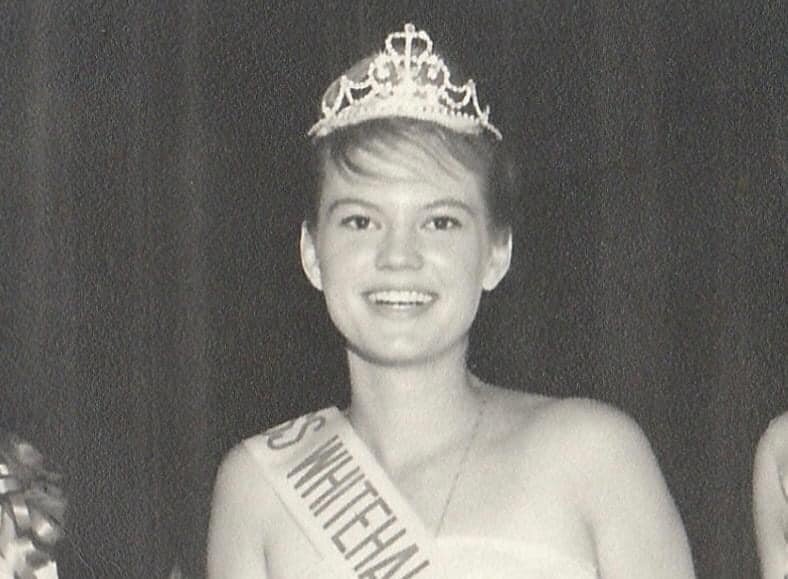 Catharine Rice Nelson died June 19th, 2022 after a long battle with COPD. The youngest of 5 children born into a very musical and large extended family, she was forced to play the only instrument the family orchestra needed: the bass drum—which was almost as tall as she was. Growing up in small-town Whitehall, WI she played the role of pesky little sister; hugged and climbed a lot of trees; got pelted with salt-shot for stealing watermelons; broke many bones; read many books; and wandered off on so many adventures that, after she hopped a freight train as a young child, she got tied to the front porch with a sign that said “don’t untie, signed her mother”.

She entered the Miss Whitehall pageant on a lark, and (to her great dismay) won, becoming the Queen of Beef and Dairy Days, which required competing in the Miss Wisconsin pageant. She HATED having her picture taken and being the center of attention so she was very happy she didn’t win that one. She managed to escape to Longwood College at the University of Wisconsin, where she studied speech and drama, married a theater student, and eventually wound up a faculty wife in Charlottesville, Va.

She was an early head start teacher, volunteered as an election official every year until her health became too bad, and was a life-long advocate for democratic causes, the arts, social justice, and the environment. It remained a great disappointment to her that her daughter STILL buys the toilet paper made from virgin trees and not a recycled brand. She always made sure her recycling was cleaned and sorted, fed any stray animal she saw (including birds, squirrels, raccoons, possums etc.), sponsored a whale every year, always hugged trees, and occasionally howled at the moon. She spent her career working with the mentally ill, and had a special rapport with schizophrenics. She once managed to diffuse a police stand-off with a patient by sternly telling the man to “Put that knife down!”, and he did. Although brilliant and empathic, she was not particularly gifted with common sense and was easily flustered.

A favorite family story involves her getting stopped at a random police checkpoint, where she turned the windshield wipers on instead of her headlights and accidentally squirted the trooper with wiper fluid, leading to his very astute observation, “Ma’am, it’s a good thing your seatbelts are automatic.” Indeed. She survived breast cancer, but a 50 year smoking habit did her in.

She leaves a daughter, Jennifer Hoh (Donald Hill) and two beloved grandsons, Benjamin and Daniel, all of Reston, Va; niece Anna Martino of Ct; nephews William Rice (Tabitha) of Tx and TJ Martin (Domi) of Chile and Ca; and many friends near and far.

Share Your Memory of
Catharine
Upload Your Memory View All Memories
Be the first to upload a memory!
Share A Memory
Send Flowers
Plant a Tree