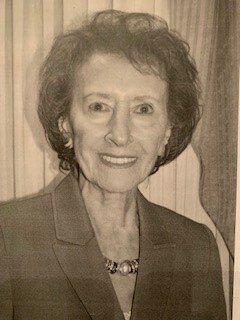 Known as Dolly to family, Sarah was born to the late Romanian immigrants, Vasilie and Christina Vasei, July 6, 1931, in Akron Ohio, She was one of 6 children. Sarah graduated from West High School in 1949, where she was a majorette and later earned her Realtors license in 1963.  She greatly enjoyed her life long career starting with Yeonas in the early days, and most notably, 50 years with Long and Foster, in the Vienna office, winning numerous awards.  As a member of the Million Dollar Club, and never really retiring, Sarah sold her last house at the age of 90.  She was a founder of St. Mary Orthodox Church, in Falls Church, Parish Council VP, sung in the church's choir, was a member of the Pan Orthodox Madrigals, having sung at such prestigious venues such as the White House, Kennedy Center, Supreme Court, the National Cathedral and the US Naval Academy.  Sarah had a most beautiful and angelic voice.  She was known for her green thumb and loved her Gardenias and all the wildlife visiting in her backyard.  She was kind, honest, humble, artistic and tenacious. She was a woman of principles and worked incredibly hard at keeping her family going.  Sarah was a very special person to all that knew her.

Sarah is survived by her husband Arthur B. Zimmerli Jr., her four children, Lisa Zimmerli of Vienna, Steve Zimmerli (Stephanie) of Fairfax Station, Greg Zimmerli of Fairfax, and Sue Matelski (Stanley) of Purcellville, as well as her six grandchildren, Holly, Sandra, Mitchell, Mason, Shelly and Evan, all residing in the area, as well as nieces and nephews.  She was predeceased by her sisters, Mary Edwards, Flora Grossmeyer, Helen Sokol, Mitzie Treharne and brother Theodore Vasei.

The family asks in leu of flowers that a memorial donation be made to St. Mary Orthodox Church, 7223 Roosevelt Ave., Falls Church VA  22042.

Share Your Memory of
Sarah
Upload Your Memory View All Memories
Be the first to upload a memory!
Share A Memory
Send Flowers
Plant a Tree