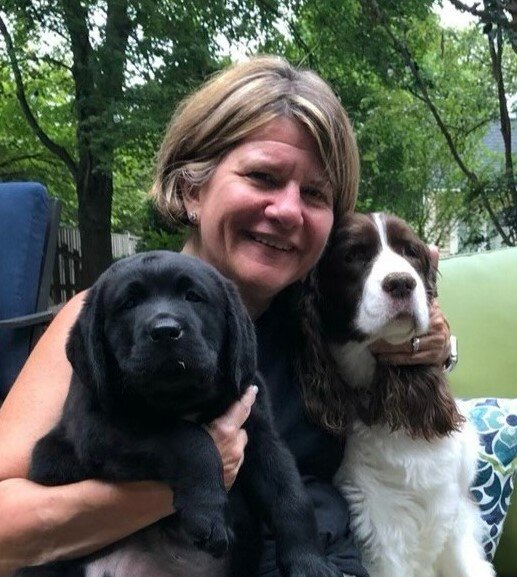 Marianne is also survived by Atticus and Rosie, our magnificently rambunctious one-year-old black lab and gracefully aging English Springer Spaniel.  They have provided great comfort and joy over the last year.

Marianne was born in Jacksonville, Florida, where her father was stationed as a pilot for the US Navy.  Mike’s Naval career took the family to Milton, Florida; Newport, Rhode Island; Monterey, California; and Cupertino, California, before settling in Burke, Virginia.  Marianne graduated from West Springfield High School in 1981 and then proudly attended Virginia Tech.  In Montieth Hall during her freshman year, Marianne met a group of wonderful women who have met every month for four decades to discuss that month’s book club reading and the even more critical topics of the day including their families, friendships, food, wine and (occasionally) to enumerate their husbands’ inadequacies.

Marianne graduated Phi Beta Kappa from Virginia Tech in 1985 with a double major in English and Psychology, which left her with no option but to attend law school.  After graduating from the University of Virginia Law School in 1988, she began a successful career in commercial real estate law advising companies both in a private law practice and in-house, most recently with Costco.  Throughout her career, she developed and mentored colleagues and friends to form lifelong bonds.  As was Marianne’s way, she remained connected and nourished friendships along the way – including from her first law firm, McGuire Woods, where friends and colleagues still gather every December to celebrate the wonder and gift of enduring friendship.

Marianne’s life was filled with the joys of a life well-lived.  She loved Tottenham Hotspur (much less so Liverpool), Virginia Tech football (much, much less so UVA), watching the Nats and the Capitals win championships, cycling the W&OD trail hundreds of times, skiing the Rockies dozens of times, and attending 28 Springsteen concerts.  She was a tireless volunteer for causes and activities important to her, whether as a manager of her sons’ soccer teams, giving to charitable organizations, and contributing time and effort squeezed into an already full schedule.  And as a strong woman, a proud mother, and an accomplished lawyer with an exceptional mind, she never lost an argument with her family.  Not once (except when she let you win).

Marianne had unwavering faith, a steadfast devotion to her family, a brilliant legal intellect, a finely tuned moral compass, and a keen sense for social justice.  We were all beneficiaries of her unmatched hospitality, generosity, and her enviable culinary skills.  As the congregants at St. John Neumann well know, Marianne had the loveliest singing voice, where invariably she sang hymns a half-beat too early and a touch too loud, perhaps in an effort to protect her less-gifted family members.

Marianne’s most enduring trait was to place others unfailingly before herself.  She was the place so many turned when they needed someone to listen, reflect, help or just receive an encouraging smile (or knowing admonishment) and to share in moments both easy and challenging.  Marianne had the grace, presence and ability to live in each moment and appreciate the subtleties of each individual close to her.

As our friend Wilson Mann describes her, “in a merciless world, Marianne chose mercy.  With so many who choose not to listen, she understood and listened.”  In perhaps her most important and poignant lesson to us all, she demonstrated strength, perseverance, humor and grace in the most difficult challenge one can face.  She was at peace throughout the past year, sure in her faith, and trusting in God’s will and timing.  She would have embraced Irish poet John O’Donohue’s view that she would not be going “somewhere strange, merely back to the home she never left.”

Share Your Memory of
Marianne
Upload Your Memory View All Memories
Be the first to upload a memory!
Share A Memory
Send Flowers
Plant a Tree