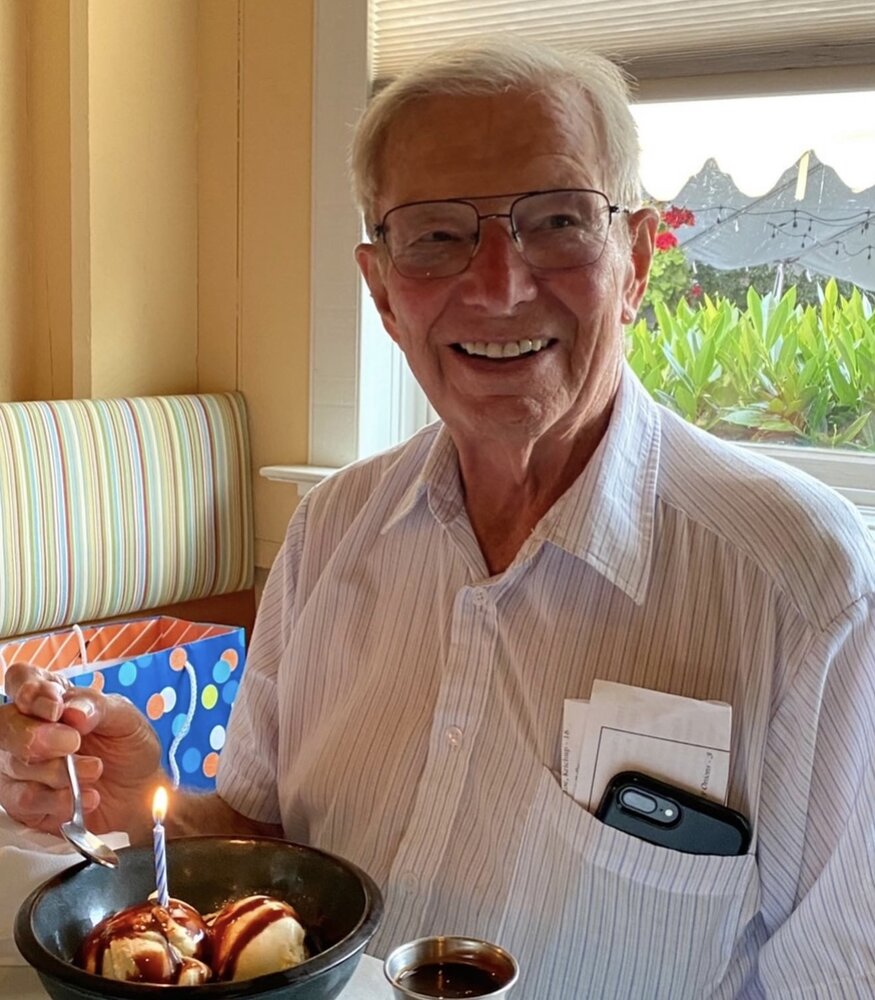 Please share a memory of George to include in a keepsake book for family and friends.
View Tribute Book

George “Bobby” Smith, 92 years, entered into the peaceful presence of heaven, on September 9, 2022.  He spent his last days at his home located in Purcellville, under the loving care of his son Dale, daughter-in-law Kristina, Compassus Hospice, and caretakers Suzy and John.

George was preceded in death by his loving wife of 67 years, Merlyn Marie Smith.  He was a wonderful father and is survived by his son and daughter-in-law, Dale and Kristina, daughter Cathy.  Grandfather to Heather and Matt (Dale); Kristin and Steven (Cathy).  Great grandfather to Harper and Mattox (Heather and Matt); Mikaela (Matt and Alicia); Vivianna and Sebastian (Kristin and Andrew).

George was born in Washington DC and raised in Herndon, VA.  He graduated from Herndon High School in 1948.  George served the Army as a staff sergeant and fought in the Korean War from 1952 to 1954.  George worked as an iron worker both before and after the Korean War.  He worked on many buildings and bridges in Washington DC, including the Washington Post, Naval Yard, White House, and Dulles International Airport.  He then went on to get his real estate license in order to understand the housing market prior to establishing G.R. Smith Construction Co., building custom homes.  After a successful building career, he bought one of the first Jiffy Lube franchises, leading to the eventual closing of the construction company.  He continued his success in the Jiffy Lube business until he retired in the early 1990s.

As a young man, following in his father’s footsteps, George was an active member of the Masonic Lodge of Herndon.  George had many hobbies over the years, including hunting, shooting, boating, fishing, but his ultimate passion was flying.  After learning how to fly, he proceeded to build two helicopters and an airplane in his garage.  George was a member of the local chapter of EAA.  Some of his favorite achievements would include flying a helicopter from CA to VA twice and receiving an award for flying more Young Eagles (children) in a helicopter than any other pilot in the country.  He thoroughly enjoyed taking anyone and everyone for a ride in his helicopter.  George had to personally give up piloting his helicopter several years ago but was able to continue flying frequently, due to the kindness of his good friends Gary and Norman.  George’s last flight was on August 20, 2022, with his son Dale and pilots, Gary and Norman.

George loved his family beyond measure and was very kind and benevolent to both family and friends.  George was always smiling, had a positive outlook on life, and was never afraid to try something new.

In lieu of flowers, we request that donations be made to The Tunnel to Towers Foundation in Memory of George R. Smith. Link to donate: https://t2t.org/donate/

A Celebration of Life service for George “Bobby” Smith will be held on Saturday, November 5, 2022, 11:00 am at Bethany United Methodist Church located in Purcellville VA.

Share Your Memory of
George
Upload Your Memory View All Memories
Be the first to upload a memory!
Share A Memory
Send Flowers
Plant a Tree