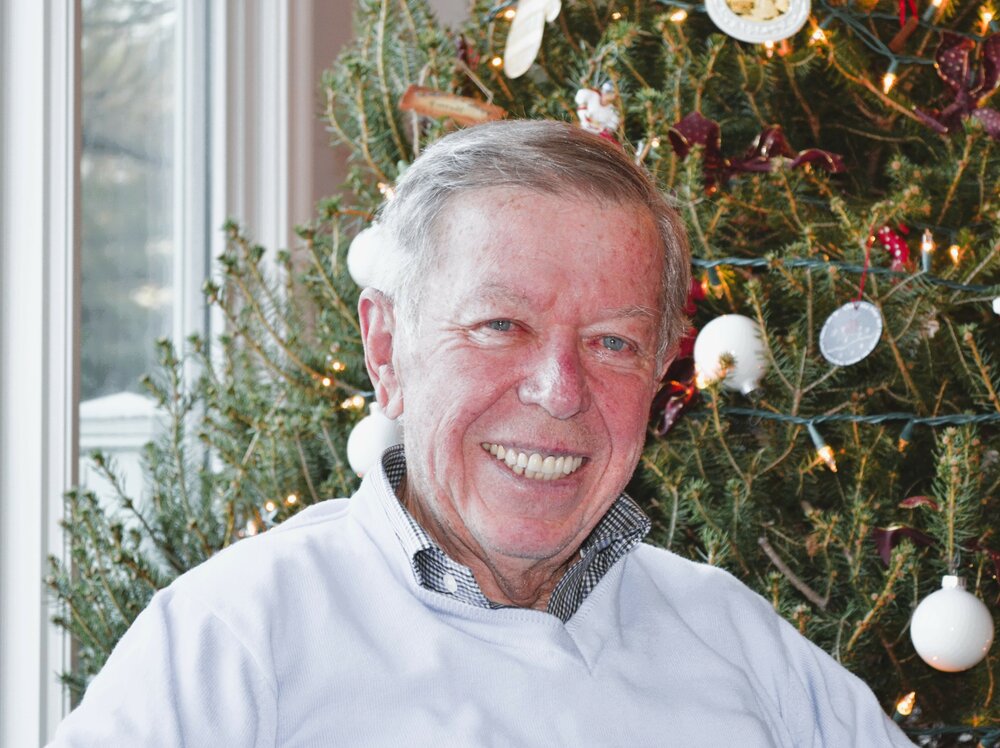 Please share a memory of James to include in a keepsake book for family and friends.
View Tribute Book

James Joseph McBriarty passed away with his family by his side after a lengthy battle with Alzheimer’s disease.  He was born to Irish immigrant parents Alice and Simeon McBriarty on October 14, 1940.  Jim was the youngest and last surviving of three children.  Jim had a brother John ‘Jack’ McBriarty and a sister Mary ‘Lolly’ Gianni.  Jim is survived by his wife of fifty-six years, Phyllis and their daughter Anna ‘Lolly’ Hall along with a son-in-law Thomas and two grandchildren Garrett and Brennan.  Jim unfortunately had to say goodbye to his son Michael McBriarty far too early with his passing from Acute Myeloid Leukemia in 2000.

Jim was a self-made success story from a compilation of his boundless determination and capacity for hard work. At the young age of five, he started selling newspapers with his older brother on the city streets of Lynn, a gritty suburb of Boston, Massachusetts.  His innate talent for sales and marketing began on those streets and ascended all the way to create his own marketing firm.  After graduating from St. Jean Baptiste High School, he attended night classes at Northeastern University.    His work experience included selling medical supplies for E.F. Mahady Company and building materials for GAF, Vanguard, and Georgia Pacific.  He eventually embarked on his own and found great success with his ability to connect with people. His company, JM Marketing, Inc, was the largest distributor of roofing materials in New England.

His love of people could also be seen in the many ways he gave back to the community.  Most prized on the list was his adorning a red Santa suit to spread cheer to children.  He would do this for kids unlucky enough to be in the hospital during the holidays.  Friends would also ask him to play Santa for their families and he would happily oblige.  He also volunteered by helping the homeless, serving the church, and housing low-income families.  However, seeing the kids’ faces light up after playing Santa was always his favorite.

Jim also had a special fondness for the town of Milford, NH.  After meeting his wife Phyllis, he bought some land, and they raised their family in this tight nit community.  Most Saturday morning’s he could be found having coffee with long time neighbors and family friends, the Stetson’s.  He would frequently visit his brother’s insurance company located on the town oval and they would grab lunch together.  As a tribute to his son, Jim established a fishing derby for the town to celebrate his son’s love for the sport and help kids who never picked up a rod before.

A memorial mass will be held on Friday October 7th at 10:30 am at Saint Theresa’s Catholic Church 21371 St. Theresa Lane, Ashburn, Virginia.   In lieu of flowers, donations may be made to SHARE, a non-profit 501 c (3) providing food, clothing, and emergency financial resources to families in southern New Hampshire (www.sharenh.org).