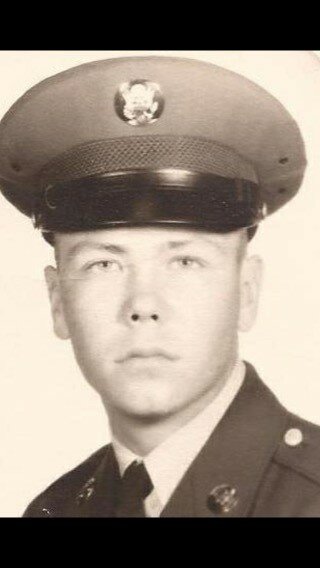 Thomas (Tom/Tommy) William Schuyler departed this life on October 16, 2022, at his home in Sterling, Virginia.

Tom was born on April 25, 1949, in Washington, D.C. to George Stephen Schuyler and Florence Veronica (Kelly) Schuyler.  In 1967 he enlisted in the United States Army and was a member of the 3rd Battalion, 8th Infantry, 4th Infantry Division eventually attaining the rank of Sergeant.  He served two tours of duty in Vietnam and was wounded during his first tour by a mine explosion.  After suffering these wounds, he volunteered for a second tour of duty in Vietnam.  He was a decorated veteran, having been awarded the Purple Heart, National Defense Service Medal, The Vietnam Service Medal, Combat Infantryman’s Badge, Vietnam Campaign Medal, Good Conduct Medal, Army Commendation Medal and 3 O/S Bars.  Tom went on to serve many years with the Virginia National Guard 116th Infantry Brigade Combat Team after his Honorable discharge from the United States Army.

Tom was preceded in death by his parents; by his brother Stephen Joseph Schuyler, Sr; and by his grandson Noah Long.

After his military duty, Tom started his career at DC Metro Transit Authority as a diesel mechanic where he was a devoted employee for 31 years.  Tom was an active member of the Loudoun Elks #2406 where he was a 21 year member and received “Elk of the Year” in 2006-2007.

His love for his children, sons-in-law, grandchildren, and extended family was fiercely unconditional.  After his retirement Tom looked forward every day to his visit to the Elks to meet with friends who he admired deeply.  He thoroughly looked forward to his annual trout fishing trip in Galax, VA with close friends.  Tommy will be missed dearly and never forgotten.

Burial with military honors at Arlington National Cemetery will be scheduled at a future date along with a reception that will follow the same day at Loudoun Elks in Sterling, VA.