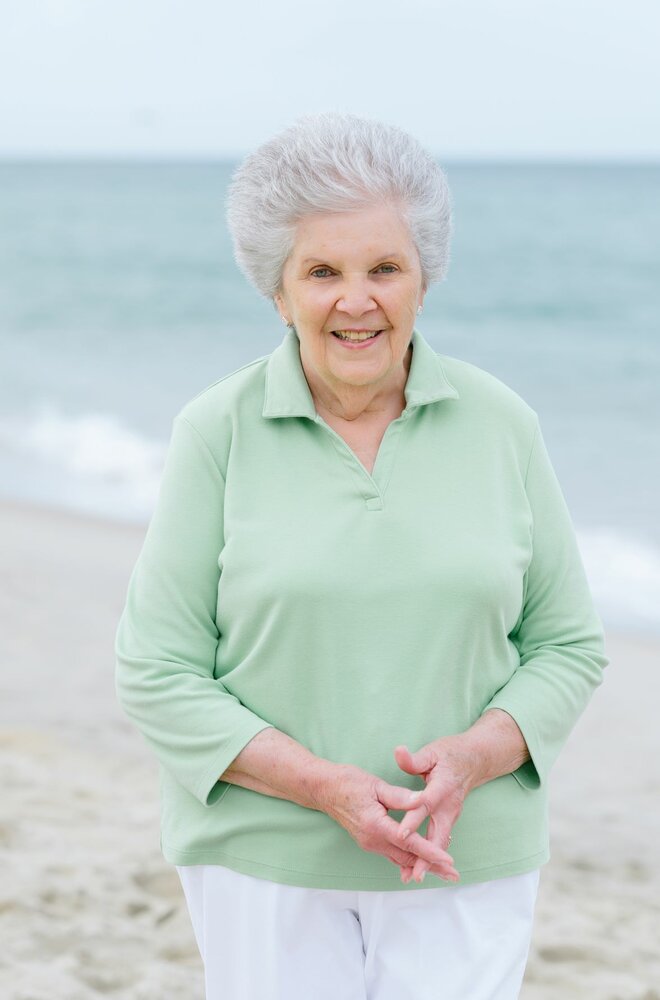 Please share a memory of Joan to include in a keepsake book for family and friends.
View Tribute Book

Joan grew up in Maynard, Massachusetts, a mill town west of Boston, where her father, John Donohue, practiced law. Her mother, the former Margaret Dean, had been a milliner.  Joan studied nursing at Massachusetts General Hospital, where she earned her RN certification. While working as a nurse, she studied at Boston College to earn her bachelor’s degree in nursing and later returned to Mass General to teach nursing. She earned a master’s degree in nursing at the University of Colorado and then moved to New Orleans, where she taught nursing at Louisiana State University. In 1964, she moved to Washington, DC to teach at the Georgetown University School of Nursing.

In 1966, she married Bernard O’Reilly, an attorney with the federal government. The next year their daughter Maura was born and they moved to the New Town of Reston—they were the first to purchase a home on Pegasus Lane. There they would meet wonderful neighbors over the years who would become lifelong friends. They became active in the community in Reston. Joan was a founder of the Hunters Woods Cooperative Preschool. Daughter Beth and son Tom soon completed the family.

She and the family were active members of the Reston Catholic Community, which became St. Thomas à Becket Church in Reston.  They were original members of St. John Neumann Church when it was founded in 1979. Joan supported St. John Neumann by, among other things, greeting parishioners at the Welcome Desk and as a “Holy Housekeeper” who tidied up the church.

Joan was known as the Neighborhood Nurse, providing advice to neighborhood families on which scrapes required stitches and which ailments needed a doctor.  She also continued her nursing career by teaching in the St. Joseph’s College clinical nursing program at Providence Hospital in Washington and the community nursing program at George Mason University.  She also worked as a workers’ compensation rehabilitation counselor, and enjoyed the last years of her career as a nursing advisor for a health insurance company.

Joan retired in 1996 and she and Bernie took time to enjoy traveling.  They took tours regularly for many years, visiting places from Ireland to Istanbul, from Marrakesh, Morocco to St. Petersburg, Russia, and those in between. Those experiences enriched their lives.  She collected Santa Clauses everywhere they visited and these were displayed every Christmas with stories about where they were from.

Nothing gave her greater joy in retirement than being a wonderful Nana to her two grandchildren and making lots of memories with them.  She also learned how to play Mah Jongg and would look forward to playing regularly with her Mah Jongg friends until her recent illness.

Many lasting family memories were made during annual vacations to Cape Cod, the Delaware beaches, and later the Outer Banks of North Carolina.  The beach was her favorite place and she couldn’t wait to feel the ocean breeze, hear the waves crash, and watch the sky over the water at night.

Joan is survived by her husband, Bernard, her daughters Maura Papas (Herndon, VA) and Elizabeth O’Reilly (Raleigh, NC), her son Thomas O’Reilly (Boston, MA), and her beloved grandchildren Christopher Papas (whose wife is Kathleen) and Cathleen Papas.  Nephew John Donohue and niece Nancy Donohue Byrne also survive her. She was predeceased by her brother John Donohue and sister Janet Donohue.

In lieu of flowers, friends may wish to donate to causes close to Joan’s heart, such as the American Heart Association or Smile Train, in her name.

Funeral services will be held Thursday, November 3 at Saint John Neumann Church. Visitation will be at 10 am, Mass at 11 am, Reception at noon.  The graveside ceremony will be at Chestnut Grove Cemetery in Herndon at 2:30 pm.

For those unable to attend in person, there will be a livestream of the funeral at this link: https://boxcast.tv/view/funeral-mass-for-joan-oreilly-dwsyo1evx4t4joobesjb

Share Your Memory of
Joan
Upload Your Memory View All Memories
Be the first to upload a memory!
Share A Memory
Send Flowers
Plant a Tree