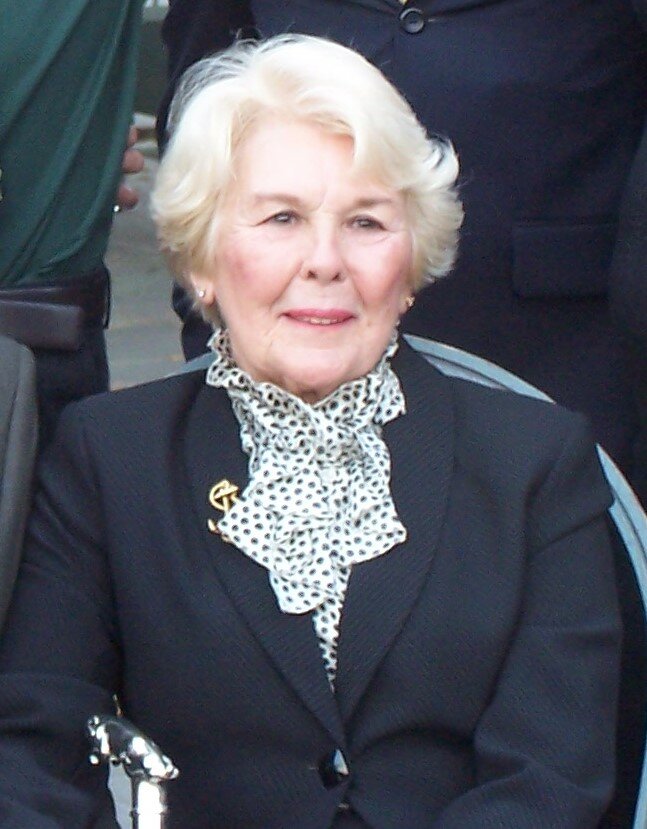 Please share a memory of Audrey to include in a keepsake book for family and friends.
View Tribute Book

Audrey Diane (Stogoski) Robey, 88, passed away peacefully on January 13, 2023. Audrey grew up in Jersey City, New Jersey, graduating from St. Aloysius High School before attending business school and working at the Colgate-Palmolive Company. Always one for a good time, Audrey and her friends went to the 1952 Army-Navy game where she met her husband, the late Captain George (Dick) R. Robey, Jr., USN, Retired who graduated from the United States Naval Academy in 1954. They married and spent the next 24 years of submarine service moving to various ports in California, Virginia, Connecticut, and Florida before retiring from the Navy in Carlisle, PA.

Audrey embraced the Navy life, actively supporting other Navy submarine wives through various long-term deployments, keeping in contact with her “Navy Family” throughout her life. Audrey was an accomplished Navy wife, serving as President of the Wives Club, and earning accolades from the U.S. Department of Navy upon her husband’s retirement in 1978.

Audrey had a keen eye for fashion, antiques, and interior design and was also an accomplished painter. Her love of travel took her crisscrossing the U.S. and various other countries enjoying beautiful vistas and culture wherever she was. Lifelong pictures depict her love of the ocean, traveling, swimming, camping, hang-gliding, hiking, flying, and of course, shopping – when it came to an adventure, Audrey was always up for it!

Family was everything to Audrey, singly raising her young family while Dick was out to sea for months at a time. Somewhere along the way, she found herself on a farm in the middle of Pennsylvania. There she continued to raise her then-teen aged children, supporting them through various sports, band, theater, and school activities that six kids would dive into throughout their formative years. The farm also came with a plethora of animals to include horses, pigs, steer and chickens. A funny twist to the “Girl from Jersey City” but she conquered the “Green Acres” lifestyle the same way as she did with the Navy.

Longing for the sea life again, Audrey and Dick spent 20+years in Bethany Beach, DE hosting their grandchildren during the summers and building floats for the various holiday parades with their neighborhood families and friends. As the unofficial “Mayor of Bethany Beach” she would often be seen enjoying the sand, sunshine and waves with her matching beachwear, chair, and sunglasses.

A celebration of her life and interment will be held at the United States Naval Academy on February 13, 2023. A mass at the St John Neumann Church, 620 N Bestgate Rd, Annapolis, MD 21401 at 10:30 am followed by a reception at the Naval Academy Club on the USNA Academy grounds, followed by a committal service ceremony at the USNA Columbarium at 2:00 pm where she will be interred with her husband.

Share Your Memory of
Audrey
Upload Your Memory View All Memories
Be the first to upload a memory!
Share A Memory
Send Flowers
Plant a Tree