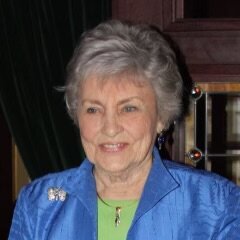 Please share a memory of Muriel to include in a keepsake book for family and friends.
View Tribute Book

Long-time Herndon resident Muriel Norma Turner died peacefully at her home. She was 92 years old. The vivacious and beautiful English born Muriel held a lifelong passion for history and geography and travelled internationally into her nineties.

Muriel was born on April 13, 1930, in the town of Sheerness, on the Isle of Sheppey, Kent, England to Dorothy and Mathew Webb.

Shortly before WWII began, the family relocated to Gloucester for her dad’s job. A cathedral city, Gloucester was a target of German bombing raids. Muriel remembered the Anderson bomb shelter in the backyard and her father asking her to keep her pet cat quiet to he could hear the bomber’s engines to know if it was German or British planes flying overhead.

After leaving school she followed her cousin Dorothy’s footsteps and became a three-year apprentice hairdresser. Her first job was with Hill and Harvey Hair Salons.

Her first marriage in 1954 to an American serviceman brought her to the United States and ended in divorce in 1958.  Muriel stayed in Virginia, eventually meeting a single US Army dad raising a young son. A party sparked romance as she was asked to bring men to the event for all the single ladies and Harlin Turner was one of the men she invited from work. While her date was a nice guy, it was Harlin who called the next day and invited her to a play and dinner at the Watergate. He later told her it was on the first date when he knew he was going to marry her.  Muriel married Harlin February 4, 1967 at the Old Post Chapel at Fort Meyer, Virginia.  The marriage included years of travel and work overseas.  Before their first anniversary they had moved to Iran where Harlin served for two years. After retiring from the military, Harlin began working with Bechtel in New York City. It was there Muriel worked for Edward Fields Carpets, a luxury rug designer creating rugs for such historic rooms as the White House Oval Office. She enjoyed her kind and fun neighbors on Staten Island and hosted her parents who made their only USA visit during that time.

The couple also lived in Riyadh, Saudi Arabia for several years in the late 1970s, and Muriel ended up returning to her roots by creating a hair salon in their villa to take care of all the “expats” who had nowhere to get their hair cut and styled. During this time, she discovered a love of gardening by turning the back yard, at first a patch of desert sand, into a vibrant garden.

Upon returning to the US she began growing plants in the more fertile soil of San Francisco, California. Muriel ended up growing prize chrysanthemums and joining clubs including the Chrysanthemums, Mums, Lilly and Herb Societies among others, and continued placing in flower shows across the country as well as becoming a judge for competitions on the East Coast.

The Five Hills Garden Club in Vienna, Virginia became an important part of Muriel’s later years. She began to create pottery for her floral designs and ended up with her own kiln, firing hundreds of beautiful containers for shows and gifts.

Muriel cared for her husband until he died in 2011. She retired from flower judging in 2019 but continued her love of growing plants and design until her death.  She also became a member of the Fortnightly Club, a historic philanthropic association in Herndon. She continued her love of travel, visiting relatives in England and kayaking during a 2020 UnCruise to Panama with friends before the Covid-19 pandemic. While the coronavirus isolated seniors, Muriel continued to stay busy at home and active in water exercise and yoga and looking after rescue cat Miss Lucy Locket.

She is survived by her stepson, Miles Turner (Susan) Manteno, Illinois, grandchildren Marc (Lizzie), and Kathleen (Andrew), and great grandchildren Molly and Finnley.

The memorial service will be held at St. Timothy’s Episcopal Church in Herndon. (February 11, 2023 at 11:00 AM.  Her ashes will be interred next to her husband during a private ceremony at Arlington National Cemetery.

Memorials may be made in Muriel Turner’s name to Doctors Without Borders, the Humane Society of the United States, or the charity of your choice.

Share Your Memory of
Muriel
Upload Your Memory View All Memories
Be the first to upload a memory!
Share A Memory
Send Flowers
Plant a Tree