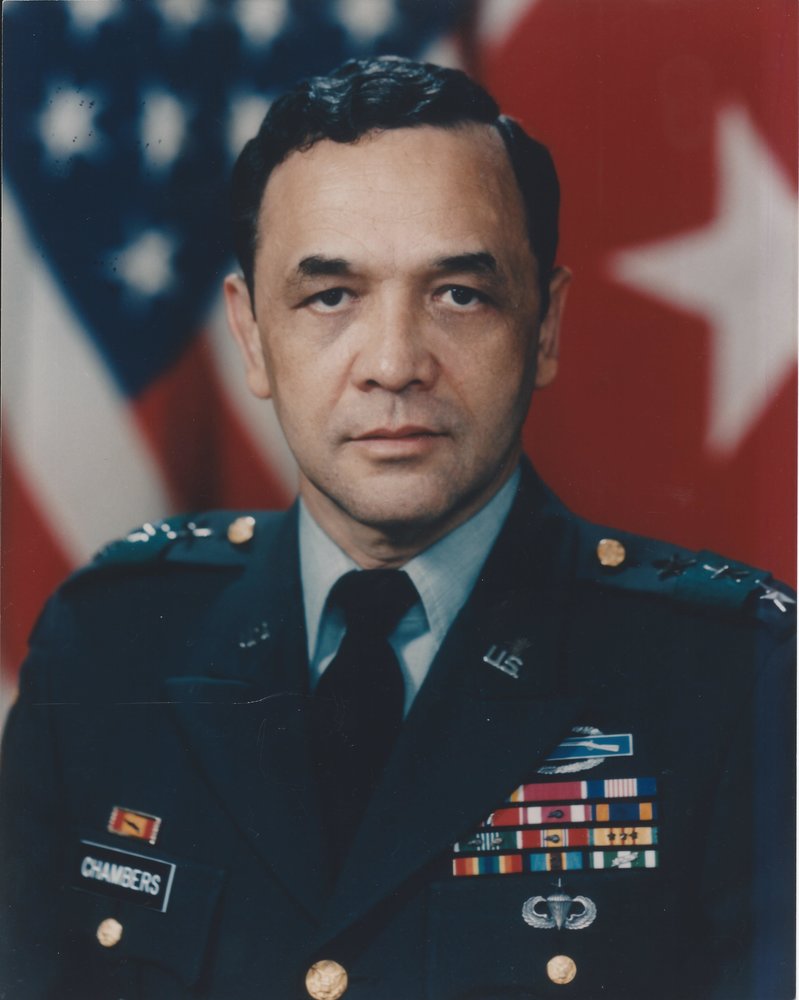 LTG (Ret) Andrew Phillip Chambers, 85, passed away peacefully at his home surrounded by his loving family on Saturday June 3, 2017.

Andrew was married to Norita Elizabeth (Garner) on May 8, 1954. They enjoyed 63 years together.

Andrew, also known as Andy, was born on June 30, 1931 in Bedford, VA to Charlotte Hadessa (Selden) and Lawrence Everett Chambers. He later moved to Washington, DC, after the death of his father, with his mother and 4 siblings; Charlotte, Loretta, Lawrence, and Melvin.

Having attended Paul Lawrence Dunbar High School, Andrew earned an Army ROTC Scholarship and later enrolled at Howard University, from which he graduated in 1954. After being commissioned as a Second Lieutenant in the United States Army. Andrew served his country with distinction for over 35 years achieving the rank of Lieutenant General.

Following his retirement from the U.S. Army in 1989, Andrew went on to lead a successful career as a civilian, working as the Director of Industry Operations for the Association of the United States Army. He later assumed the position of Director of Community Service for AmeriCorps. Andrew finished his extraordinary career in 2005 as the Vice President of University of Maryland University College Europe.

During his time at Howard University Andrew met his wife Norita. Through their union, Andrew became the loving father of five children; Andrew, Kathy, Linda Ware (William), Steve, David (Chris). He was adored by his grandchildren; Bryant(Tamyko), Andrew, Aaron, Emily, David, and Kyle and his four great-grandchildren; Xavier, Alexander, Christopher and Zachary.

Andrew is survived by his wife, five children, grand and great-grandchildren, as well as three of his siblings, Loretta, Lawrence, and Melvin.

He is preceded in death by his parents and sister Charlotte Walker.

Memorial services will be held at Alfred Street Baptist Church, Alexandria VA on June 15, 2017 at 11:30 AM. The family will receive friends from 10:00 AM until 11:30 AM prior to the service. He will be laid to rest with full military honors at Arlington National Cemetery on Wednesday, October 18, 2017 at 3:00 PM.

In lieu of flowers, contributions may be made in honor of Lieutenant General Chambers at www.bisonfunder.howard.edu/andrewpchambers

Share Your Memory of
Lieutenant General (Retired)Andrew
Upload Your Memory View All Memories
Be the first to upload a memory!
Share A Memory